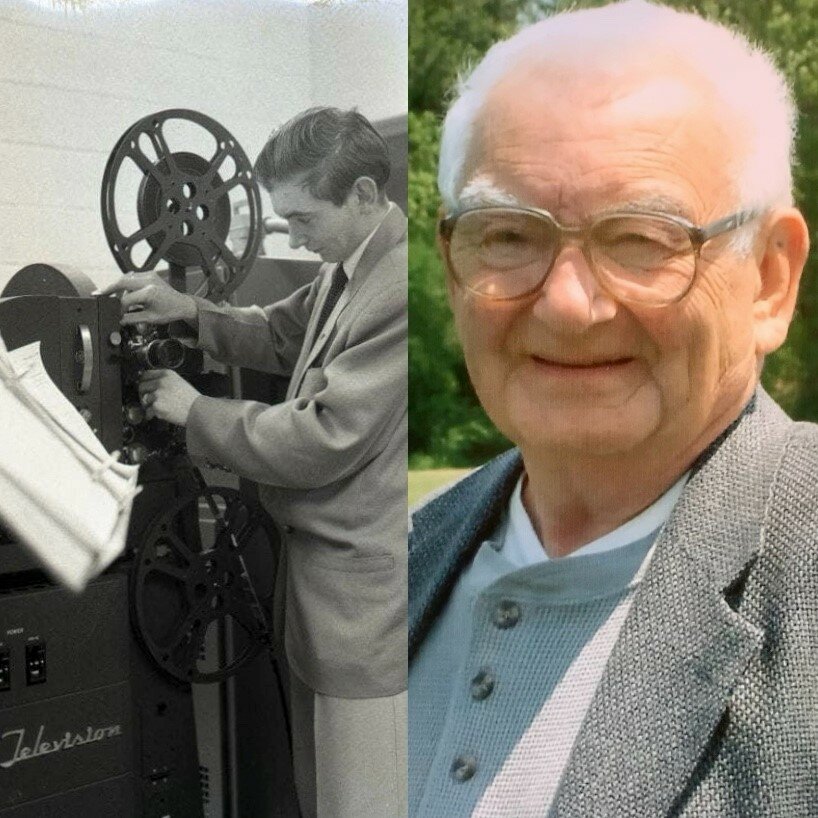 Don attended St. Martin’s R.C. school in London then De La Salle high school on Richmond St. in London.  He looked to a future as an architect but left De La Salle after one year and followed his other love for photography, joining Ron Nelson Photography in 1949.  He loved his job and excelled in doing remote broadcasts as an audio man for programs originating from several local establishments, meeting famous musicians such as Tommy Dorsey, Ray Anthony, Harry James as well as several Canadian artists.  He also did weekly broadcasts of the London Majors.  When CFPL obtained a license to open a TV station in 1953, Don was chosen to be one of the Production Crew.  Over the next forty-two years he worked on audio, Telecine (film projection) film editing, camera, props, video tape, promotion, video tape editing, office assistance, and Master Control Director.  He edited and produced a staff newsletter for several years, as well as being one of the TV reporters for the 4th Estate, an in house production for the staff of the London Free Press.  He was also a member of several communities within the Free Press Employees Association.

Don retired in 1993 after forty-two years with CFPL Broadcasting.  Using the experience and friendships he had built up over his working years, Don organized and produced a monthly news magazine to keep retired and current TV/Radio/Wingham employees in the loop following the sale of the radio/TV stations.  Don’s knowledge of the TV station and its staff through the years, pegged him with the title of “Unofficial Historian”,  a position he both cherished and welcomed.  At Don’s request, there will be no visitation or funeral service.  Don has donated his body to the University of Western Ontario for medical research.  A remembrance get-together will be held at a later date.  Donations to the Children’s Hospital of Western Ontario, 800 Commissioners Road W., London, On N6A 5W9 gratefully acknowledged.  On-line condolences are available through www.mcfarlane-roberts.ca.  McFarlane & Roberts Funeral Home (Lambeth), 519-652-2020 in care of arrangements

To send flowers to the family or plant a tree in memory of Don Godin, please visit Tribute Store
Print
Share A Memory
Send Flowers