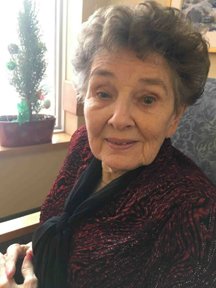 Heaven has another angel! Peacefully on Sunday, December 20th 2020, Maureen passed away at the age of 88 after a long battle with Cancer, Parkinson’s, and eventually dementia. Predeceased by her husband Alan. She will be greatly missed by her daughter Susan, her son-in-law John, and her grandchildren Jenna (Tristan) and Kyle. Also predeceased by her sisters Joyce and Norma, she is survived by her sister Greta. Born and raised in Darlington, England as the older sister to triplets, she met her husband Alan and soon after embarked on their journey to Canada. After selling their house and most of their possessions they boarded ship and set sail across the Atlantic to their new life. It was in Hamilton that they settled and bought their second house where they raised their daughter and lived happily for over 50 years. Maureen cared for her daughter during the week and worked at the Hamilton General Hospital in the accounts office on the weekends, often traveling back and forth to her weekend getaway in Port Dover. After her retirement she and her husband were fortunate to spend their winters in Port Orange FL. It was there she learned (twice) that she would become a grandmother. After the passing of her husband, Maureen moved to London to be closer to her family. She lived in an apartment in Chelsea Park for a few years and then moved to her final residence at McCormick Home. Maureen was a fashionista in her day and always loved to dance. Over the years she had played badminton, sewed her own clothes, and was a talented painter. She was a kind and lovely lady in so many ways and will be fondly remembered by her family and friends!

At Maureen’s request there will be no visitation.  A private family celebration of Maureen’s life will be held at the McFarlane & Roberts Funeral Home, Lambeth 519-652-2020 on Monday, December 28, 2020.  Cremation. In lieu of flowers, donations to the McCormick Care Foundation 2022 Kains Road, London, Ontario N6K 0A8 or to another charity of your choice gratefully acknowledged.  On-line condolences are available through www.mcfarlane-roberts.ca.

Thank you to all our family and friends for your love and support, and special thanks to the staff at McCormick Home, especially those who cared for Maureen on Evergreen Walk.

To send flowers to the family or plant a tree in memory of Maureen Bell, please visit Tribute Store