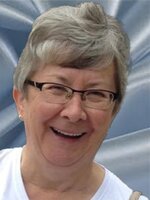 Peacefully, at her home in London Ontario, with her loving husband and daughter by her side, Tuula Nielsen (nee: Hakomaki) passed away at the age of 74.  Beloved wife of 48 years to Ole Nielsen, loving mother to Liisa (nee: Nielsen) and John McInnis, and proud grandmother to Jaxon, Kyson, Kenadie and Leythan McInnis. Devoted sister to Tarja and the late Rob Fournier (2000), Pirjo Howse, and Lena and Bob Hamilton.  Tuula was predeceased by her parents Arvo (2005) and Mirjam (2014) (nee: Ylipelkonen) Hakomaki. She will be lovingly remembered by extended family, nieces and nephews, cousins in both Finland and the United States, neighbours who became friends, and her university girls whom she stayed in close contact with.

Born in Finland, and later raised in Timmins Ontario, Tuula spent her working years as a nurse in both Timmins and Newmarket Ontario.  Meeting Ole on a blind date, the two married in November of 1976, and had their daughter in March of 1980.  After retirement, she and Ole moved to Dorchester Ontario to be close to Liisa’s family. It was here that Tuula enjoyed sitting and watching the horses outside her back door, cooking meals for the family, and taking care of her grandchildren.  Sadly, early signs of dementia robbed Tuula of the things she once enjoyed. In her final few months, Tuula found joy in watching television with Ole, and visits from her grandchildren.

At the family’s request, there will not be a funeral or visitation. Cremation has taken place. Donations to the Canadian Mental Health Association (https://cmha.ca/) or the Alzheimer's Society of Canada (https://alzheimer.ca/on/en) may be made in her memory. Online condolences are available through www.mcfarlane-roberts.ca.  McFarlane & Roberts Funeral Home (519-652-2020) in care of arrangements.   A celebration of life will be held at a later date.