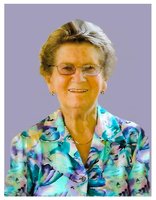 It is with sadness that we announce the passing of Almut Carroll in her 99th year.   Predeceased by husbands Paul Herget (1941) and Joseph Carroll (1967).  Almut loved her Lambeth Community and was active in the Horticultural Society, Crafters Club and the Lambeth United Church. Her knitting skills were the envy of her friends and family, and she was never seen with idle hands. An avid gardener, she maintained her home well into her 80’s, her bicycle her only vehicle. Almut raised her family alone with strength, courage and integrity always putting others before herself.  She will be greatly missed by son Paul (Rosemarie), daughters Anne (John) and Liz (Dave). Her loving grandchildren Cindy, Ian (Carlough), Brian (Joleen), Christine (Joost), Chris (Sarah) and Joe (Ana) as well as 9 great grandchildren.

Friends may visit at the McFarlane & Roberts Funeral Home, 2240 Wharncliffe Road S., Lambeth (519) 652-2020 on Monday, January 13, 2020 from1:00 – 2:00 p.m., where the celebration of Almut’s life will follow at 2:00 p.m.  Reverend Matthew Penny officiating.  Cremation with interment the “Rose Garden” of the Lambeth Community Cemetery at a later date.  In lieu of flowers, donations to the charity of choice gratefully acknowledged.  On-line condolences are available through www.mcfarlane-roberts.ca

Thank you to Ashwood Manor and Glendale Crossing for making her last years pleasant and comfortable.